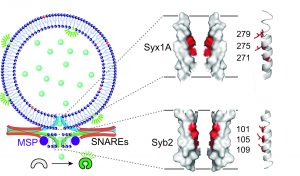 We used nanodiscs to isolate fusion pores in their initial open state. Using biochemical reconstitution, we demonstrated that the nascent fusion pore is a hybrid structure, formed by both lipids and the transmembrane domains (TMDs) of SNAREs. In this transient structure, one specific side of the SNARE TMDs face the lumen of the fusion pore (shown in red). 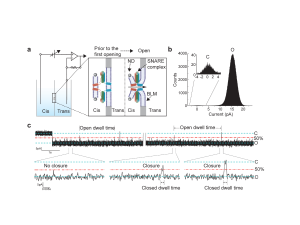 Illustration of the experimental setup and a representative recording of an individual fusion pore.

a. Schematic drawing of a fusion pore measured in the nanodisc-black lipid membrane (ND-BLM) assay system. The layout is shown in the left panel; the middle and right panels depict the binding and assembly of trans-SNARE complexes and the opening of a fusion pore. The precise structure of the subsequent reversible, closed state is unknown, but flickers to this state are likely mediated by folding transitions of trans-SNARE complexes. b. Representative current histogram showing the open (O) and closed (C) states of single fusion pore formed by trans-SNARE complexes. c. Sample trace depicting how the open and closed states were defined. After fusion pore opening, any current values lower than 50% of the open state current value are defined as closures. The time between two closures is defined as the open time, and the time that the current remains in the closed state is defined as the closed time. 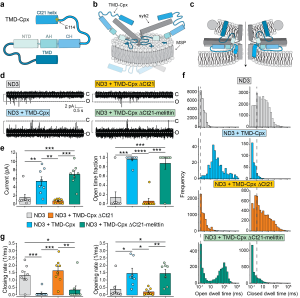 The Cpx C-terminal amphipathic helix stabilizes the open state of nascent fusion pores formed by trans-SNARE complexes. (a) Illustration of the TMD-Cpx fusion protein with each domain annotated. The protein comprises the TMD from CD4 and a 30-residue flexible linker, followed by: the N-terminal domain (NTD), the accessory helix (AH), the central helix (CH) and the C-terminal domain (CTD) of Cpx. The yellow asterisk indicates the location of the Ct21 truncation, beginning at residue E114. (b) Depiction of the 13 nm TMD-Cpx NDs used in this study. Cpx is shown in blue, syb2 shown in dark grey and the membrane scaffold protein (MSP) shown in light grey. Conditions include syb2 alone, syb2 + TMD-Cpx, syb2 + TMD-Cpx Ct21, and syb2 + TMD-Cpx Ct21-melittin; for all experiments in this figure, three copies of syb2 (ND3) and three copies of the indicated Cpx construct were co-reconstituted into the NDs. (c) Cross-section of the trans-SNARE complex formed between the TMD-Cpx ND and the t-SNARE BLM. Since the precise location of Cpx at the fusion pore site is unknown, a vertical (right) and horizontal (left) representation of the Cpx Ct21 is shown. A gradient of dark, medium, and light grey depicts SNAP-25B, syb2 and syntaxin1A, respectively. The MSP is shown as a grey circle. The black arrow indicates the ionic conduction path. (d) Representative open pore traces from ND-BLM recordings that were acquired with each type of ND. Seven to eight individual pores, each from independent experiments, were analyzed for each condition. This description applied to the following analysis.  (e) Left panel, quantification of the current (pA) through trans-SNARE ND-BLM fusion pores under each condition. Right panel, quantification of the fraction of time that the trans-SNARE ND-BLM fusion pores remained open for each condition. Color and label annotations also apply to panel h. Data are shown as mean ± SEM. (f) Open and closed dwell time distributions generated from trans-SNARE ND-BLM fusion pores for each condition. (g) Fusion pore opening and closing rates, respectively, derived from the closed and open dwell time analyses. Data are shown as mean ± SEM. **** denotes p-value < 0.0001; *** denotes p-value < 0.001; ** denotes p-value < 0.01; * denotes p-value < 0.05, determined from two sample t-test analysis

DNA-nanostructure-templated protein reconstitution in nanodisc (ND). Step (1): A pre-assembled DNA 6-helix-bundle (6HB) tile is functionalized with proteins of interest (POI), via hybridization between the ssDNA extensions (green) on tile and DNA-POI conjugates. (2): The purified tile-POI complex is reconstituted into a ND encircled by membrane scaffold protein (MSP). Due to steric hindrance, each face of the ND can only host up to one tile. A representative negative-stain electron microscope image of a tile-ND complex with three synaptobrevin-2 is shown. (3): An optional step to remove DNA scaffold. This method enables precise control of the copy number (equals the number of ssDNA extensions on tile) and orientation (all the POI on each tile will face the same orientation) of the POI in a single ND. The generated homogeneous POI-NDs not only endorse confident interpretations for single-molecule experiment results, but also open door to particle averaging in electron microscopy. (A) Illustration of the GUV-pore formation assay. Recombinant HaloTag protein is encapsulated in the GUVs and the JF635i ligand is present in the media. Pore formation allows the ligand to enter the GUVs and bind the HaloTag protein, causing an increase in JF635i fluorescence (magenta). (B) Representative example of the GUV pore formation assay using melittin. GUV lipids are labeled with 0.1 % rhodamine-PE (white). Scale bar = 5 µm. (C) Progressive 5 second image series of GUVs after treatment of 5 uM Cpx, Cpx DCt21 or SUMO domain with the Cpx C-terminal helix, SUMO-Ct21. Pore formation and vesiculation was consistently observed in >10 repeated trials from >3 independent protein preparations. Scale bar = 5 µm.

Video showing the real-time action of complexin on GUV morphology. GUVs (shown in white) were generated with encapsulated recombinant HaloTag protein, and the fluorogenic, membrane impermeant HaloTag ligand, JF635i was placed in the media. When the GUVs are intact, the HaloTag protein and the JF635i ligand are separated by the GUV membrane, yielding a negligible fluorescent signal in the media. Application of complexin creates pores in the membranes, allowing the JF635i ligand to enter the GUVs to react with the HaloTag protein, causing an increase in fluorescence (magenta). 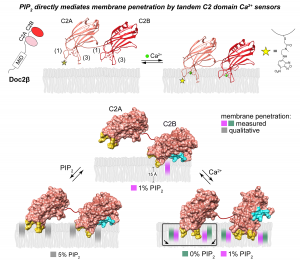 A primary focus of the lab concerns the mechanisms of action of Ca2+ sensors for exocytosis. Synaptotagmin-1, the Ca2+ sensor for synchronous neurotransmitter release, contains tandem C2 domains and triggers exocytosis via Ca2+-dependent insertion into lipid bilayers. This figure depicts Doc2β, a separate but related Ca2+ sensor for asynchronous and spontaneous neurotransmitter release. Using site-specific labeling with an environmentally sensitive probe, we have shown that Doc2, like syt1, penetrates membranes in a Ca2+-dependent manner. We have used a quantitative approach to measure membrane penetration depth and found that, in the case of Doc2β, the depth of membrane penetration depends specifically on a PIP2, a dynamically-regulated phospholipid present at release sites. These findings define biophysical diversity among these Ca2+ sensors and suggest new regulatory mechanisms for vesicular secretion. 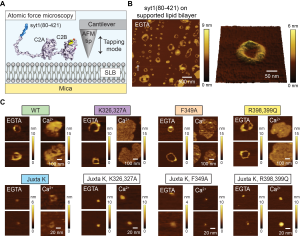