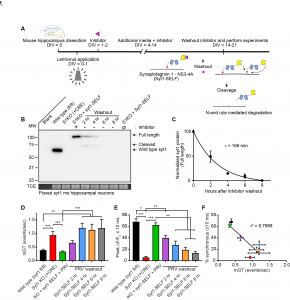 Here we applied knockoff technology to synaptotagmin 1. Knockoff is a new method developed in the Chapman lab to acutely disrupt membrane proteins. Briefly, a small, unique, substrate cleavage site is inserted just above a transmembrane domain; at the same time the hepatitis NS3-4A protease is appended to the carboxy terminus. Following the application or withdrawal of pharmaceutical grade NS3-4A protease inhibitors, cleavage and therefor protein level can be acutely controlled. This method excels when applied to type I membrane proteins as the subsequent cleavage products are degraded via the N-end rule. (A) Illustration of the syt1 knockoff protocol. (B) Representative anti-syt1 immunoblot demonstrating acute syt1 disruption in mouse hippocampal neurons. (Ø) denotes a condition in which cultures have never been exposed to inhibitor. (C) Self-cleavage time course of syt1-SELF, upon inhibitor washout. (D) Rates of spontaneous glutamate release (mGT) in control neurons and during syt1 disruption. (E) Percentage of synchronous glutamate release measured in control neurons and during syt1 disruption via iGluSnFR ΔF/F0 peaks occurring within 10 ms following a single stimulus. (F) Inverse correlation between synchronous release (≤10 ms) and spontaneous (mGT) release in control neurons and during syt1 disruption. Groups are color coded as in previous panels. 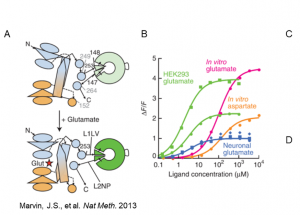 (A) Diagram of fluorescent glutamate sensor (iGluSnFR) and (B) changes in fluorescence upon glutamate interaction, data from Marvin, J.S. et al. Nat Meth. 2013. (C) Example of spontaneous release from a neuron with disrupted syt1 function. (D) Digitally magnified area with arrow pointing to release site. Trace is from ROI drawn around release site. At least 4 spontaneous events are observed.

The direct and specific egress of SYT1 to axons. a) A schematic depicting the RUSH system¹ used to retain SYT1 in the ER and release it with the addition of biotin. b) Live-cell image of rat hippocampal neurons showing the SYT1 reporter 30 minutes after biotin addition. The axon is identified by the presence of an axon initial segment (anti pan-neurofascin antibody) and denoted by an arrow. Scale bar is 10 microns. Kymographs were generated from the SYT1 channel, as shown by dashed boxes, and drawn from the soma outward direction for 20 microns. Corresponding kymographs from proximal dendrites (c) show the absence of mobile SYT1 reporter, whereas the proximal axons (d) show the presence of mobile SYT1. e) The displacement for all observed SYT1-containing vesicles is plotted in the anterograde (positive) or retrograde (negative) direction with respect to the soma for each compartment. The total time and area observed is equivalent between all compartments. Figure is modified from reference 2. 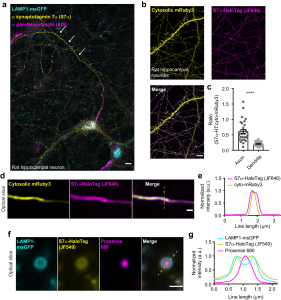 In hippocampal neurons, SYT7 is localized to both the axonal plasma membrane and LAMP1+ organelles that include active lysosomes. 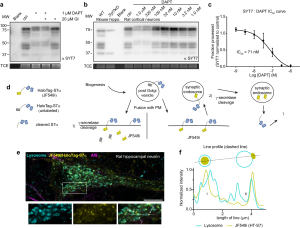 Synaptotagmin 7 is cleaved by the intramembrane aspartyl protease presenilin.

(a) Representative anti-SYT7 immunoblot from rat hippocampal neurons with trichloroethanol (TCE) staining as a loading control. Conditions from left to right are blank/no protein, control conditions, neurons ttreated with 1 μM DAPT (N-[N-(3,5-difluorophenacetyl)-L-alanyl]-S-phenylglycine t-butyl ester) (presenilin competitive inhibitor), DAPT and 20 μM GI 254023X (ADAM10 selective inhibitor), or treated with GI 254023X only, all from DIV 5 onward. (b) Representative anti-SYT7 immunoblot using mouse hippocampal neurons for wild-type (WT) and SYT7KO antibody controls along with rat cortical neurons grown in various concentrations of DAPT to assay half maximal inhibitory concentration (IC50), with TCE staining as a loading control. (c) Graph of the fraction of processed synaptotagmin 7 (SYT7) when grown in various DAPT concentrations in relation to control conditions (IC50 curve) results in an IC50 of 71 nM. The lowest specific SYT7 band was used for quantitating cleavage and IC50 of DAPT. Values are means +/- SD after log transformation from three independent experiments. (d) Cartoon illustrating the logic and methodological approach to determine whether full-length SYT7 protein transits through the plasma membrane (PM) prior to amino-terminal cleavage by γ-secretase. JF549i is a membrane-impermeant version of JF549 (JF549 and JF549i are nonfluorogenic). In (1), cleavage can take place in the post-Golgi vesicle, prior to axonal PM localization or cleavage happens at the PM. No fluorescent HaloTag is observable in this scenario. In (2), SYT7 transits through the PM before being cleaved in a synaptic endosome. Only in this scenario will fluorescent HaloTag be observable in neurons. (e) Representative super-resolution optical slice of a rat hippocampal neuron transduced with LAMP1-msGFP (cyan) and HaloTag-SYT7α (yellow). Before fixing neurons, they were incubated with 1 nM HTL-JF549i for 2 days. Fixed neurons were decorated with anti-pan-neurofascin (magenta) antibodies to mark the axon initial segment (AIS). White box indicates the area that is enlarged to show the detail below the image. The labels (i), (ii), and (iii) indicate areas where HTL-JF549i appears inside lysosomes, clustered on the edge of lysosomes, or completely independent of lysosomes, respectively. (f) Line profile from the dashed line in panel (e) with normalized intensity of LAMP1-msGFP (cyan) and JF549i (yellow). The labels (i) and (ii) are labeled on the line profile as well and correspond to the same labels as in panel (e). Cartoon schematic of the analyzed signal is above the graph. 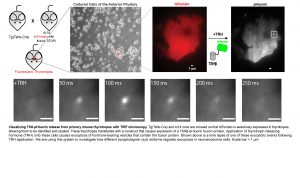 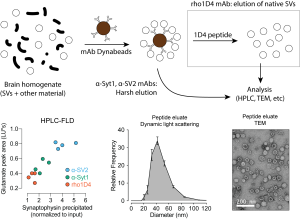 Method for purification of synaptic vesicles (SVs). Magnetic Dynabeads conjugated to monoclonal antibodies are used to pull down SVs out of complex brain homogenates. One of these antibodies, rho1D4, enables the use of a peptide to elute SVs in native form, but other antibodies against SV proteins also work well to purify vesicles for downstream chemical analysis. The bottom row of panels depicts analytical confirmation of our SVs: these organelles contain the protein synaptophysin and the amino acid neurotransmitter glutamate, are approximately 45 ± 20 nm in diameter, and have the expected appearance when imaged by transmission electron microscopy.